We now rely on electricity so much that our world couldn’t run the same without it. Imagine not being able to stream films and TV series, no more computers in offices and no more lights that turn on at the flick of a switch. Sometimes, you don’t realise how much you rely on electricity until you experience a power cut and realise you can no longer boil the kettle or heat food in the microwave. Though we take all this for granted, you may not have ever stopped to think how electricity actually powers all of our electronic devices and appliances.

Let’s start with the basics – what actually is electricity? To put it simply, electricity is a group of charged particles. When these all move in the same direction, an electrical current is created. Thinking back to your school science lessons, you’ll remember that atoms are made up of electrons, protons and neutrons, as shown in the diagram below. 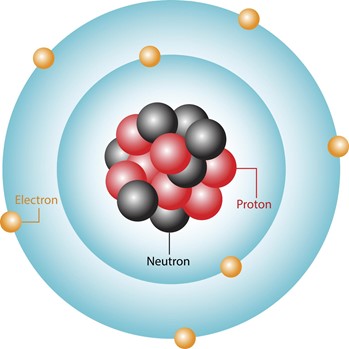 The protons and neutrons live in the centre of the atom in the part known as the nucleus. The electrons orbit the nucleus, much like planets go around the sun. A stable atom will have exactly the same number of electrons as protons. Electrons are negatively charged, whereas protons are positively charged and neutrons have no charge at all. Electricity is created when the electron is freed from the atom and forced to move in a particular direction.

Once an electron is freed, it can move around, however it’s pushed and pulled between other positive and negative charges within the space. When this happens, it often finds a new atom and attaches itself to that however now the atom has too many electrons. It frees one that does the same thing as the previous atom. This movement can continue and in doing so creates an electric current.

Current electricity (the type used to charge your mobile phone or boil a kettle) is produced when these electrons are always moving, repeating the chain effect described above over and over again. However, they can only do this when an electric circuit is complete, such as a piece of wire that’s connected in a loop. When a circuit isn’t joined, the electrons aren’t able to move and complete the circuit, therefore electricity cannot be created. The rate at which they can move also depends on the type of conductor being used.

What is an electrical conductor?

An electrical conductor is a material that allows the electrons to move freely and create an electrical current. Some materials are better at doing this than others and this is why you have good conductors and poor conductors. An example of a good electrical conductor is copper. This material allows the electrons to move freely and easily, which is why copper wire is often used. Other examples include silver, gold, aluminium, iron, concrete and steel. Note that not all of these are elements from the periodic table but man-made materials too.

Poor electrical conductors, otherwise known as insulators, include rubber, glass, oil, diamond, dry cotton and plastic. You wouldn’t be able to produce an electric current using these materials because rather than allowing electrons to move freely, they inhibit this movement. This is often why rubber is used to surround a copper wire – it keeps the electricity within the cable, which is exactly where you want it.

When was electricity discovered?

Electricity wasn’t suddenly discovered – it took thousands of years and a whole host of people to discover particular aspects of it. For instance, in around 600 BC, the Greeks discovered static electricity. This isn’t the sort that moves around a circuit, but as the name suggests, attracts certain substances to one another. Have you ever rubbed a balloon against someone’s head and raised it to watch their hair stand on end? This is an example of static electricity, and the Greek’s performed a similar experiment, rubbing amber against animal fur.

The word ‘electricity’ wasn’t introduced until around 1600 AD by Thomas Browne. Then fast forward by around 150 years to Benjamin Franklin’s well-known experiment where he flew a kite during a lightning storm. His kite acted as the conductor and drew the electricity in via the negatively charged clouds in the sky to a metal key. When he touched the key, he received an electric shock.

The first person to actually discover a moving current of electricity was Alessandro Volta (where the unit ‘volts’ comes from) in around 1800. He discovered that an electrical charge could move through a metal conductor and went on to invent the first battery.

Since then, many people have worked hard to understand how electricity works and this is how we’re able to use this type of energy in our businesses and at home.

How is electricity generated?

We’ve come a long way in the last two hundred years – from not knowing electricity can move to needing it in our homes and businesses. So how is all this electricity generated? In the UK, this is done in a number of ways, usually through the burning of fossil fuels, including natural gas and coal (though coal as a source of producing electricity has been significantly reduced in the UK). When these substances are burned, they generate a lot of steam. This steam can be used to turn turbines that create electricity, however creating energy in this way produces a lot of carbon dioxide. Instead, renewable energy is on the rise. More and more, electricity is being created from sunlight or the wind using solar panels and turbines and this has little to no impact on the environment. Around 20 per cent of the UK’s electricity comes from nuclear reactors that split atoms to produce heat, but most of these are due to close by 2035.