Real fears that a no-deal Brexit could cause higher energy bills after October 31st have been revealed, with nearly two-thirds of the country concerned that their utilities will be more expensive.

Of the 1,023 adults surveyed by energy switching specialists, Utility Bidder, has shown that the Prime Minister’s ‘no-deal’ option for leaving the EU later this month has people worried that their bills could skyrocket, a clear 60% were concerned their gas, water, electricity and other bills would increase.

James Longley, Managing Director at Utility Bidder, said: “It is clear that among a few other things, the future of energy is likely to be affected by Brexit, particularly if we leave the EU without a deal. Energy is one of the most difficult markets to predict, so adding more uncertainty in the form of Brexit is rightly concerning consumers.

“The results of our survey also reflect the contents of the recently- leaked no-deal planning report, Operation Yellowhammer, which predicted a marked increase in energy prices for homes and businesses if the UK crashes out without a deal.”

The Operation Yellowhammer report is a leaked document, now published officially by the government that aims to predict a “reasonable worst-case scenario” of a no-deal Brexit.

The report revealed that the “demand for energy will be met”, however, the report also states that “there will likely be significant electricity price increases for consumers (business and domestic), with associated wider economic and political impacts.”

Of those surveyed, younger adults were the most likely (74%) to fear increases in energy bills resulting from a no-deal Brexit, whereas the retired were least likely to be concerned. However, still nearly half (48%) believe that energy bills will escalate in the event of a no-deal Brexit.

There were differing opinions on the matter depending on region, James added: “Opinions differ depending on where people live, two-thirds of residents living in the West and East Midlands believe that energy bills will increase if Prime Minister Boris Johnson’s plans reach fruition.

“Whereas only 55% of residents living in Scotland, Yorkshire & Humberside and the East of England share this view.”

Kristian Ruby, the head of pan-European trade association Eurelectric, has been quoted as saying a no-deal exit could mean that ‘the UK faces third-party costs to use the power lines connecting Britain to European power markets, which would raise the overall cost of the energy.’

There are also plans afoot already to look at the pricing models for energy from the Department for Business, Energy & Industrial Strategy (BEIS), which also has implications for tax. Under these circumstances, the UK would cease to participate in the EU Emissions Trading System (EU ETS), and BEIS would replace emissions trading in the UK with a fixed-rate tax, called the Carbon Emissions Tax. 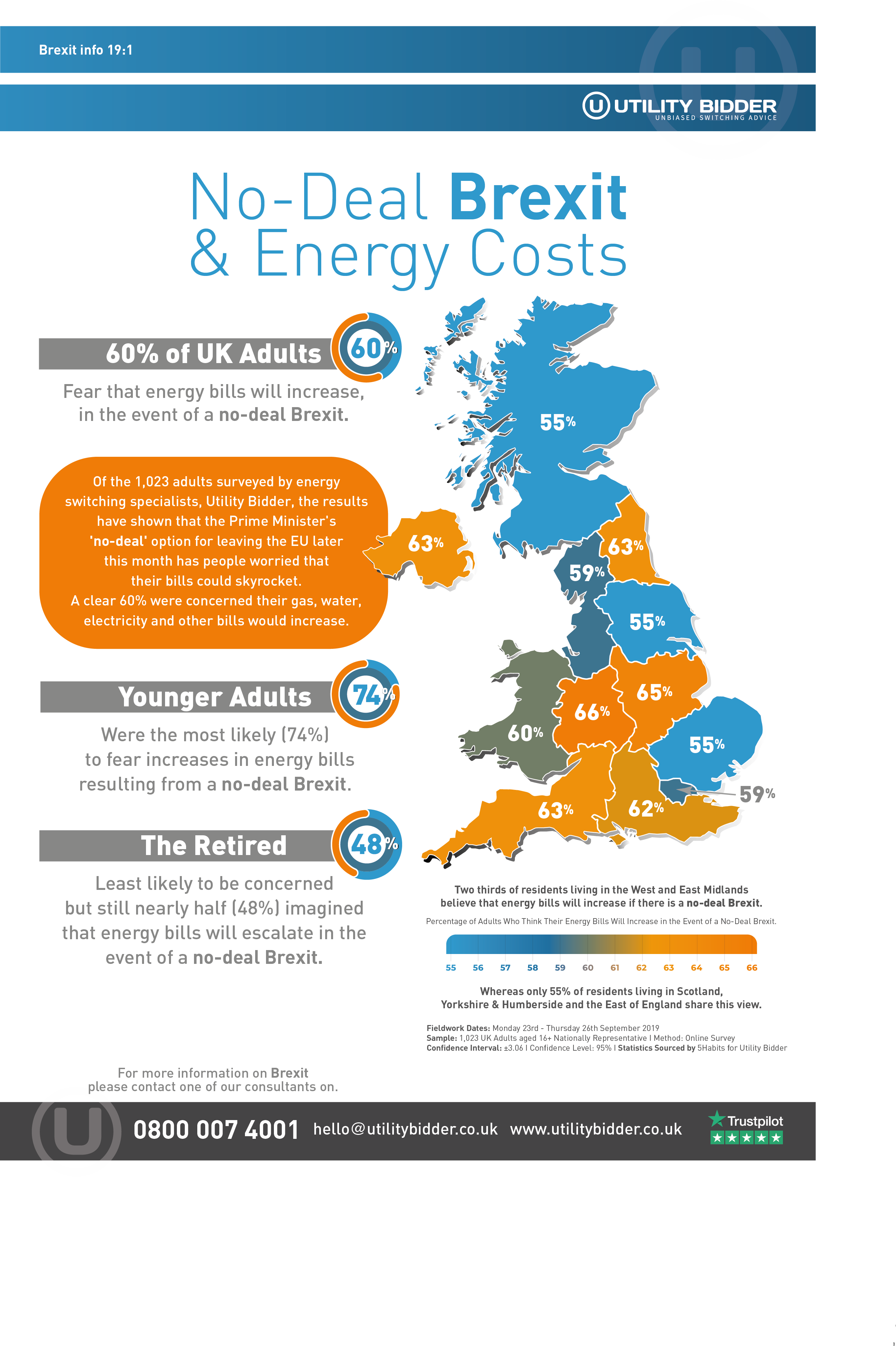 Utility Bidder is one of the UK’s fastest-growing B2B energy brokers. With offices in Corby and Manchester, the firm won both ‘Consultancy of the Year’ and ‘Best Customer Service’ awards at the Energy Live Consultancy Awards (TELCA).

Utility costs have become an increasing part of a business’s overheads, so Utility Bidder aims to decrease these costs by offering a fully comprehensive service. The company searches the breadth of the market to find you the best prices for gas, electricity, water and telecoms supplies.

Utility Bidder searches on companies’ behalf to gain competitive energy prices from all of the major suppliers. This helps protect a company’s bottom line and to ensure you aren’t overpaying for your utilities.