In today’s modern world, climate change is a heated topic and one that dominates both political and news agendas across the globe. With this in mind, it’s becoming increasingly difficult for governments, industries and businesses to ignore this issue.

However, actually demonstrating the impact of carbon emissions and being able to visualise the effects of climate change is not always easy. Deciphering any useful meaning from statistics, graphs and charts, for example, can be difficult and the significance of the impact we’re having on the environment can be easily lost.
To help cut through the noise, here at Utility Bidder, we wanted to highlight the immense volumes of daily carbon emissions produced in six of the UK’s most well-known cities by creating a set of easy-to-understand visuals.

As a leading business utilities switching service in the UK, the link between commercial and domestic activity in terms of carbon emissions and climate change fascinates us. So much so that we decided to conduct some research on this topic. What we found was amazing. Using useful data provided by the Department for Business, Energy and Industrial Strategy on emissions of carbon dioxide (CO2) for local authority areas, we were able to work out the average daily amount of CO2 emissions for 2017 in six UK cites – London, Birmingham, Glasgow, Belfast, Brighton and Leeds.
Using a calculation* to convert this CO2 data into volume, we were then able to create a visual representation of these emissions as a solid cube. These cubes were placed next to a virtual model of a significant and large landmark from each of these six cities, helping to demonstrate the vast scale of the carbon emissions crisis in UK cities. In conducting this research and creating these visuals, our aim is to encourage business owners and their employees to make more of an effort to minimise fossil fuel-powered energy usage and become more environmentally conscious. Take a look at what we came up with – you may be surprised by our findings.

London
Perhaps unsurprisingly, London’s daily carbon emissions were by some way the highest when compared to that of the other five cities. On an average day in 2017, 81,394 tonnes of carbon emissions were produced in the capital. In theory, this would be enough to produce an emissions cube 44 metres taller than The Shard – the UK’s tallest building – and 304 metres wider than the structure’s widest point. 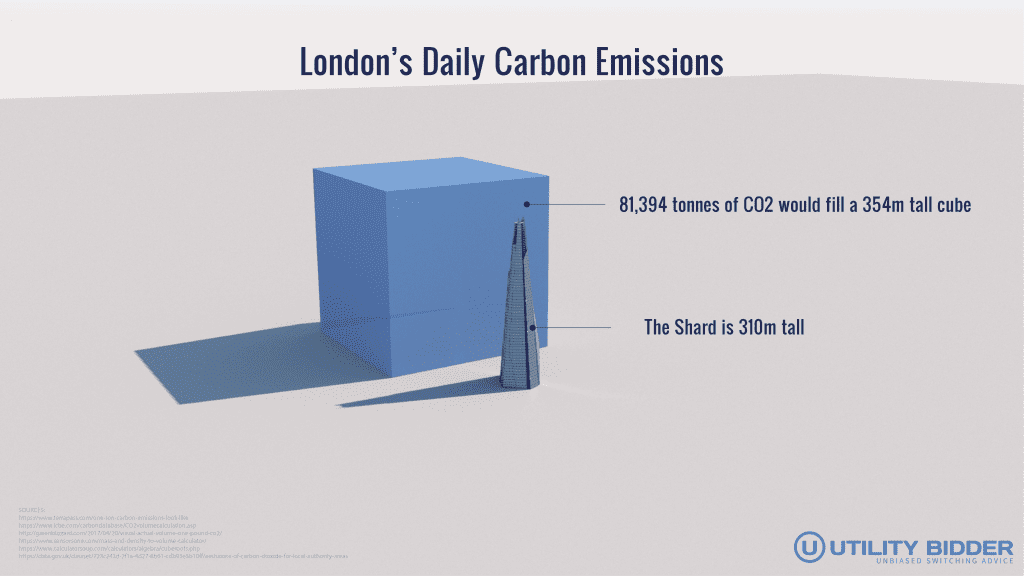 England’s second city, along with each of the remaining four cities in our study, recorded significantly lower daily amounts of carbon emissions when compared to London. However, Birmingham’s daily average of 11,557 tonnes of CO2 was still enough to produce a virtual cube that would dwarf the city’s most famous landmark. Birmingham’s cube would, in theory, stand 32 metres higher than the BT Tower at 184 metres. 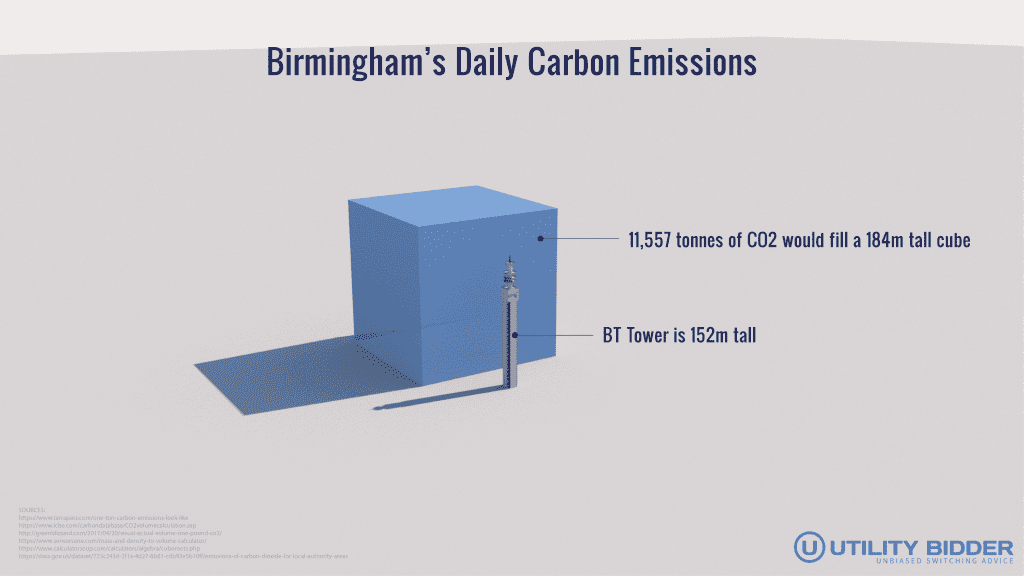 Just below Birmingham in terms of daily carbon emissions came Leeds with 10,862 tonnes of CO2 produced. While it must be noted that Leeds Town Hall is not a skyscraper in the same mould as The Shard, the fact that this Yorkshire city’s emissions cube would tower over the 19th century municipal building by a whopping 112 metres may still raise a few eyebrows. 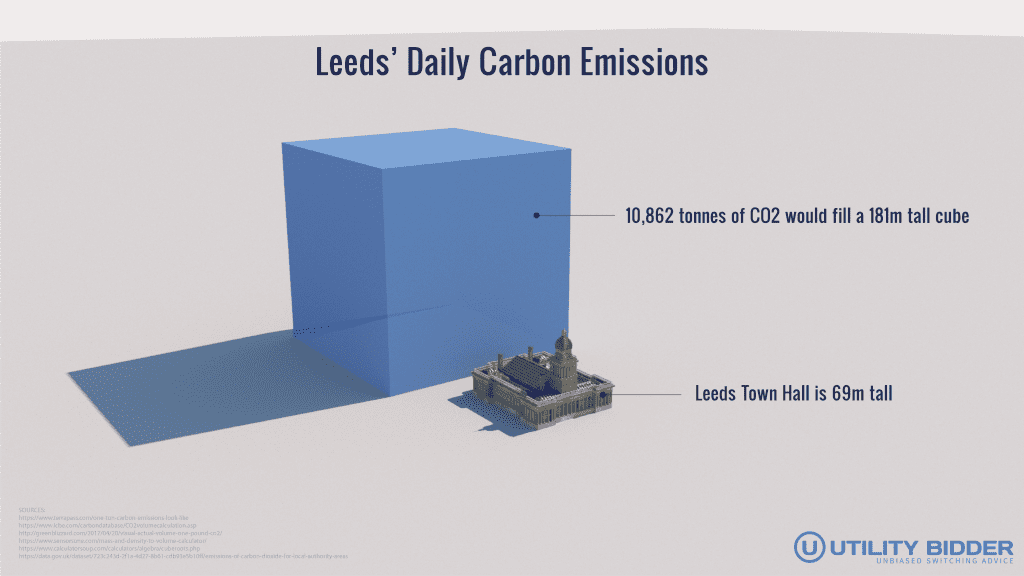 When it comes to daily CO2 levels in Scotland’s largest city, the average 7,175 tonnes produced each day may appear relatively small, particularly when compared to cities of a similar size in England. However, at 157 metres tall, this daily volume of CO2 is still large enough to create an emission cube 30 metres taller than Scotland’s tallest structure, Glasgow Tower. 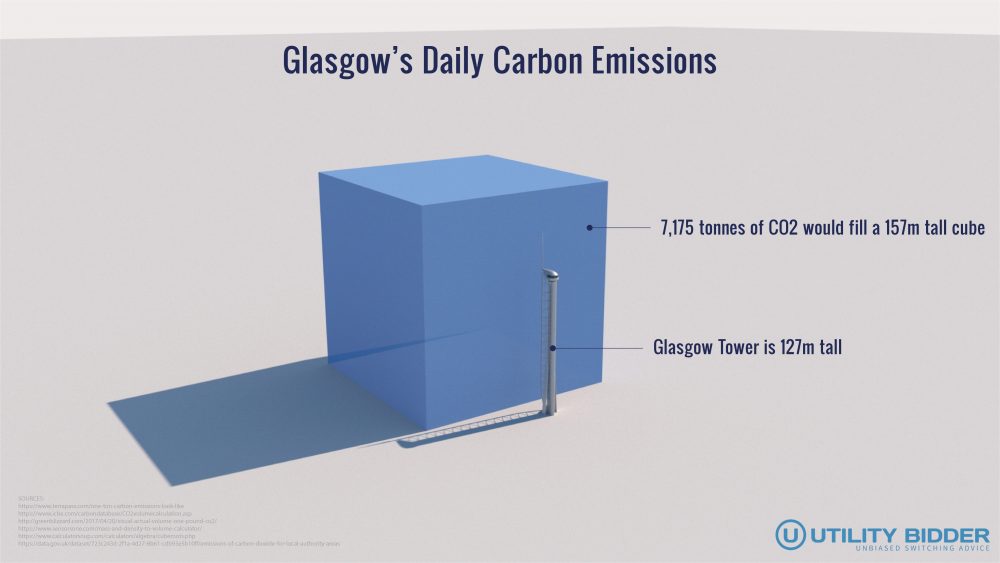 Despite being the largest city in Northern Ireland, Belfast’s average daily CO2 output is the second lowest in our study at 4,198 tonnes. However, when the city’s emissions cube is compared to the shortest landmark in our study – Titanic Belfast, standing at 38 metres – the true size of the city’s CO2 footprint becomes clear. 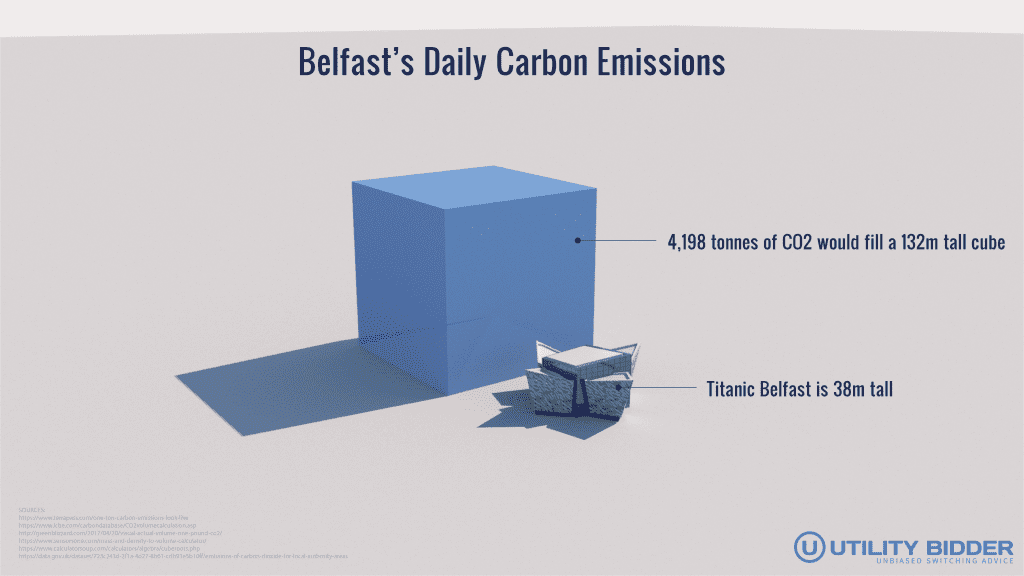 Only one of our six cities had a famous landmark that was in fact taller than their visual carbon emissions cube. The city of Brighton has a long and proud history of being an eco-friendly, green city and this is reflected in our research. Producing on average 2,466 tonnes of carbon emissions each day – around 32 times lower than London’s daily emissions – Brighton’s cube stands at 110 metres. That’s 52 metres shorter than the city’s famous i360 seafront observation tower. 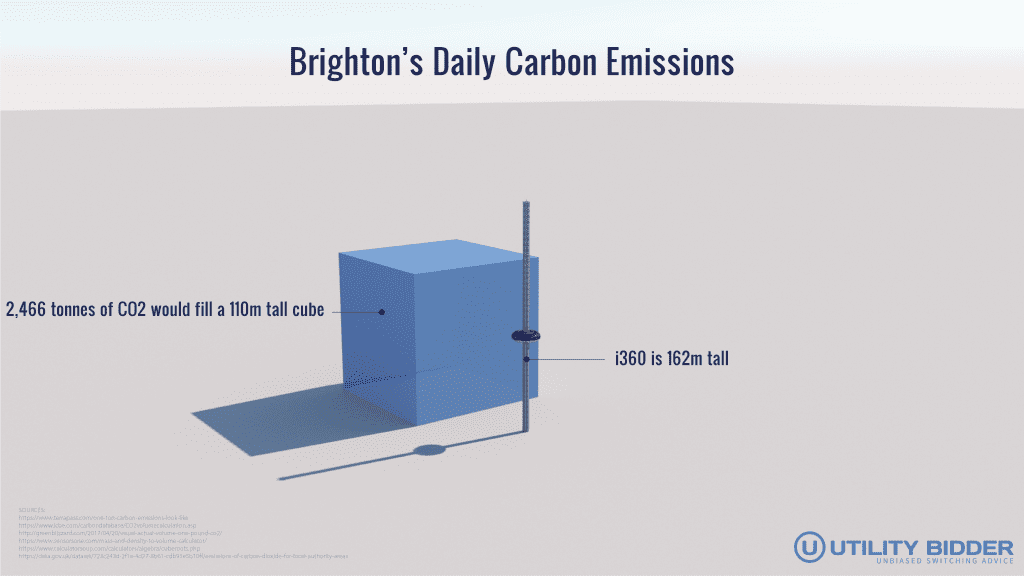 We understand the difficulty in understanding what some carbon emissions figures really mean, which is why we hope that these images can help you visualise just how much we are contributing to the current climate emergency and consequently ensure our businesses have high energy efficiency.
*Standard unit – 1 ton of CO2e occupies 556.2m³ volume (or 8.2m x 8.2m x 8.2m cube)
CO2e Density – 1.87 kg/m³