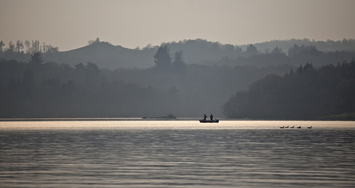 Water does make the world go round. As you’ll know, water is the key element to life on Earth – it helped mix up chemicals and compounds in the early history of life that enables micro-organisms to grow into organisms – and eventually into species that we might recognise as animals today.

Water is also a key resource in our lives: three or four days without it, and most humans would die. The same can be said of all animal life, plant life, and life beneath the seas. So – with water being such an important element – we thought we’d put together five fantastic water facts from around the globe to help underscore the incredible part water plays in all of our lives.

Let’s first look at some statistics about water, to put this precious but abundant resource in perspective. Water currently covers some 70% of the Earth’s surface – obviously, mostly the seas and the oceans, which account for 96.5% of the world’s water. The rest is help in rivers, lakes, ice caps, and glaciers across the world.

If you’re keen on working out huge numbers, the volume of water that the world holds, in total, is estimated at around 1,386 million cubic kilometres. It’s difficult to imagine a cubic kilometre of water – and it’s almost impossible to imagine hundreds of millions of them. Sometimes it’s best to say: there’s an awful lot of water on Earth.

It’s with the skies above in mind that it should come as a shock to us that the world continues to fail to provide water to all of its citizens. Indeed, a large proportion of the ‘Global South’ go without clean water supplies for much of the year – meaning that disease and illness are more common in these populations as a result. Even though 70% of the world is covered in water, only 2% of that water is currently fresh. The rest isn’t fit for human consumption.

Astonishingly, of that 2% of fresh water, over half is locked up in ice caps and glaciers across the world. So the world’s population actually only has access to a measly 1% of the water on Earth to drink – an incredible statistic that shows just how much water there is on the Earth, and how much we need to process to serve communities across the world.

It’s by now well-known that most biologists and evolutionary scientists agree on the origins of life on Earth. According to these experts, the first life will have gathered either in the seas or in small puddles where tiny single-celled organisms will have struggled for space next to other miniature organisms. Over time, these puddles or seas swashed together enough for lonely micro-organisms to make something less small – and slowly, life grew.

This is the reason that we search so painstakingly for water on other planets – if there’s water elsewhere, we reason, then there could have been life there too – extra-terrestrial life. In the meantime, though, we’re left to ponder the awesome history of our own species and consider the fact that all life on Earth descended from one water-based ‘Universal Ancestor’. An incredible thought.

Water Use Per Day

We’ve already looked at some amounts of water – but a crucial statistic to get our heads around is just how much water is ‘used’ per day in the world. This is difficult to calculate – but for you, we’ve tried. We’ll start with the basics: there are approaching 8 billion people in the world today, and each requires around 5 litres of water per day to live. So that’s close to 40 billion litres just to support human life on this planet – let alone our livestock and pets.

Agriculture uses a huge amount of a country’s fresh water – and that’s something that environmental campaigners are key to point out to farmers. Meat production, for instance, is a huge water consumer – but so are the industrial processes that help make our favourite consumer products. According to some estimates, daily water use is in around the 4 billion tonne mark – every day of the year.

You’ve heard someone tell you that you are stardust. You’ve heard others say we’re made of water. Both are entirely true, but both are also misleading. You need to remember that we’re not skin holding in mineral water – we’re composed of a great deal of H2O – but that element is also combined with others to make compounds. We’re not sacks of water – but we are, in the strictly chemical sense.

These five water facts will help you get to know the vital resource that’s all around us – in the seas, the rivers, and waiting inside the bathroom tap.